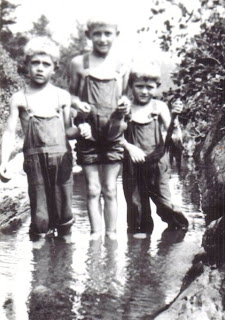 Yesterday when the sky was cloudy and rainy, I found myself looking through my picture files to begin the process of organizing for my next book. My editor, Anita Firebaugh, discovered this upcoming book in the middle of The Living Room Bed: Birthing, Healing, and Dying in Traditional Appalachia. During what I thought was the final editing, Anita called me to say she thought I really had two books in the cumbersome manuscript I had sent her. A light bulb went off in my head although I was very tired of the rewriting, editing, expanding, contracting, and frustration that goes with writing a. I said, "Oh lord, what do I do now?" I went to the computer and quickly wrote out a detailed table of contents and, sure enough, there sat in the middle of the manuscript a nearly-written book on children's games and toys. I took out the middle chapters, slammed the two ends together and The Living Room Bed was born. I cherish the day I hired Anita to be my editor!!!
Three of my first cousins
fishing with their hands
in the Shoemaker River in
Hopkins Gap.
Now, when the weather is bad or too hot for me to garden, I will be working on children's games and toys in traditional Appalachia. I think I found the cover picture yesterday. What do you think????
Posted by Peggy at 5:37 AM No comments: 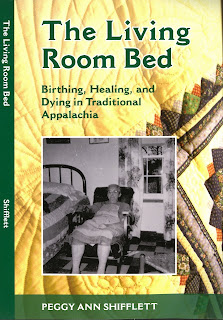 The Living Room Bed: Birthing, Healing, and Dying in Traditional

It is standard ethnographic procedure for anthropologists to perform participant observation studies on those “far and away” exotic places. In the course of doing so, that anthropologist lives among the “natives” for a year or two to better understand the culture. The Living Room Bed is an ethnographic study from a life time of participant observation. Peggy Ann Shifflett has her pulse on a culture that is so rapidly changing that it has become unrecognizable within a generation. Between these covers she has captured the essence of a by-gone era.

I grew up 325 miles away from Peggy Shifflett but, yet, in the same neighborhood. We had a living room bed, so I come to find out as I read her book. Like a fish not realizing the water around him, Dr. Shifflett’s culture surrounds me. Many of the customs and traditions she presents in this book began coursing back through my memory as I read of lullabies (hush little baby don’t say a word) and folk remedies, Lucky Strike butts (without filters) to being the youngest child (as I was), and to pulling the quilts mother made tightly around my chin as the snow flew outside to the fly swatter arsenal against a sortie of flies coming in through our screen door long needing repair.

Told from a uniquely female perspective I learned the depth of things from which I only saw the surface as a child. If you experienced any semblance of these traditions, such as your deceased father lying for visitation in your living room as mine did, or if you are from another place and time entirely, this ethnography of birthing, living, and dying in a now gone culture is full of joy and full of sorrow and full of everything that fills in between, all of which is delightful in its presentation. 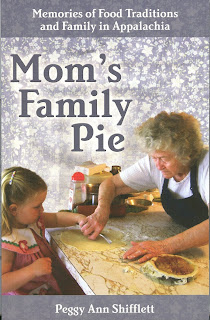 Dr. Stevan Jackson, Anthropologist at Virginia Tech, reviewed my second book-- Mom’s Family Pie: Memories of Food Traditions and Family in Appalachia, Shifflett tells the story of the seasonal quest for food to feed the families in Hopkins Gap, a small Appalachian community in . She follows the seasons beginning in February with the appearance of wild “creasy” greens and weaves the story of Moms and Dads as they filled the cellars with jars of fruits and vegetables. Each season had its special foods and Shifflett gives the recipes by season. In early spring, attention was turned toward dandelion greens; and as they began to bloom the focus was on dandelion wine. Wild mushrooms, morels, provided a special treat in late April.

In early May, the families gathered wild asparagus spread along the fence rows where the wind had dropped the seeds.

Wild strawberries in May, sweet and sour cherries in June, blackberries in July—the families in Hopkins Gap searched for what nature provided as well as planting and harvesting bountiful gardens.

Shifflett, her siblings, and her ninety-nine first cousins were directly involved in the quest for food. Putting food on the table was a family job. Many of the childhood adventures surrounding food are shared in small vignettes throughout the book. Special characters and stories are interspersed with recipes and descriptions of the food quest.

This book is a “must read” for those folks interested in the interrelationship of food, family, and Appalachian culture. Your senses will fill with aromas and tastes when you partake of Mom’s Family Pie. It is no mere recipe book with a few stories here and there. Neither is this book simply about food within a particular culture. The book is about the culture of food; food becomes the medium in which to learn about a remarkable group of people. Like your own Mom’s family pie, you can’t put Mom’s Family Pie down after just one helping. 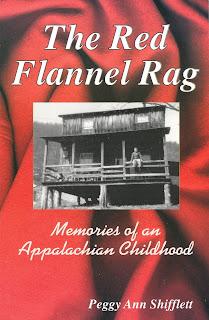 Since my retirement in 2005, I have been busy writing, traveling, and gardening. My first book is shown to the left and has received the following review from my writer friend, Becky Mushko:

In this book, Peggy shares her memories of growing up in Hopkins Gap, a small community northwest of . This book contains a treasure trove of traditional folkways from western . From birth customs to death customs and through virtually every rite of passage in between, the book takes the reader on a journey of remembrances.

Peggy spotlights real people with real names and real faces One interesting character is Peggy paternal grandmother, Molly Shifflett. She was the community healer or granny woman. Grandma Molly explains how she acquired magical powers to heal babies, grownups, cows, and even horses. “She claimed her power to be a granny woman came from being born after her father drowned in a creek when flooding waters washed his horse and wagon downstream. She talked about her powers as if to legitimize her skills, much the same as modern doctors display diplomas on the walls of their offices. She often said, ‘Here’s how you can get the powers. You can be born the seventh child in the family, you can be born the seventh child of the seventh child, you can be born on Christmas day, or you can be born after the death of your father. That’s how I got my powers. I was born after my daddy died’.”

Peggy shares her memories of watching her extended family collaborate, cooperate, and get a job done on hog butchering day. All the sights, sounds, and smells that take us from the hog on the hoof to the pork on the plate are vividly presented.

Throughout the book the “red flannel rag” appears as a symbol of “healing and purity.” First, it appeared around the neck of Cousin Virgil where his mother placed it on the first cold morning in October. It later appears as a filter to cleanse the impurities from moonshine whiskey. Peggy’s mother used a “red flannel rag” to heal pneumonia. Finally, it was tied in the mane of a mule to prevent a local witch from causing the animal to balk.

Perhaps one of the most fascinating aspects of this book is the way in which Peggy presents the logic behind Grandma Molly’s healing powers and the logic behind the use of the “red flannel rag.” She traces the practices all the way back to Celtic tradition, so that the reader can understand why the “red flannel rag” was used in a variety of contexts. In her review of The Red Flannel Rag, Dr. Grace Toney Edwards, Director of Appalachian Studies at Radford University, said, “For the reader just looking for a leisurely Sunday afternoon read, The Red Flannel Rag will hold you in your chair as it offers you a pocketful of laughs, an occasional tear in the eye, and a heart full of memories from an Appalachian past.

This book is available by emailing pshiffle@radford.edu.

Peggy
I was born in Hopkins Gap, Virginia, a small Appalachian community in the Allegheny Mountains northwest of Harrisonburg, Virginia. Hopkins Gap is not officially included in the area known as Appalachia; however, culture knows no boundaries and we are not that far from the West Virginia border. I received my B.A. and M.A.Ed from James Madison University and my Ph.D. from Texas A&M University. I recently retired from Radford University where I served as a professor of sociology and chair of the Department of Sociology and Anthropology.